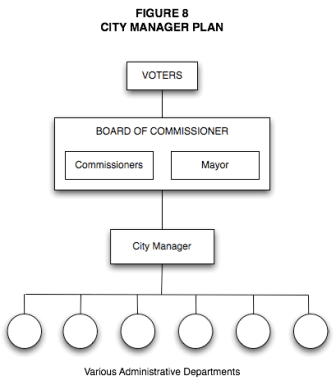 and four commissioners who make up a Board of Commissioners, which possesses the legislative and executive powers of the City. It differs by vesting the administrative power in an appointed official called the City Manager (KRS 83A.1SO).

For more information about the Danville, Kentucky  Form of Government, please contact the Legislative / Executive Department at 859-238-1200.

When a change has been approved by the voters, the effective date of the change will depend upon when the proper number of legislative body members can be secured. If the new plan results in a reduction of members, the effective date will be the date of the expiration of the terms of the members, if they are all elected at the same time, or if the members are elected on a staggered basis, when the terms of enough members have expired to have compliance. If the change results in an increase in membership of the legislative body, the effective date shall be at the time a sufficient number of members can be elected. A city shall be in compliance in no more than two years after the adoption of the new plan by the voters.

After the change, the corporate entity of the City shall remain in the same, and all statutes of ordinances in force not inconsistent with the new plan shall remain in effect (KRS 83A.160).